71 Diet members across party lines agreed to introduce the petition, which we submitted with nearly 35,000 signatures, to the Diet. Signatories were not limited to ME patients and their family members, but individuals who learned about the disease for the first time and expressed their wishes for even incremental improvements to the current situation facing ME patients. The adopted petition will be delivered to the Cabinet. Thereafter, the Cabinet will inform the House of Representatives about progress made on the petition items approximately twice a year.

The Association would like to thank every individual who signed and helped us gather signatures for the petition. We would also like to thank all ME patients who participated in the 2014 Ministry of Health, Labour and Welfare’s ME/CFS patient survey. That survey revealed that 30.2% of patients in Japan are severe patients who are bedridden or nearly bedridden. The serious situation brought to light by the survey results and the widespread media coverage of its findings allowed us to persuade the government about the urgent need for welfare services for disabled patients.

We are encouraged by the adoption of our petition by the Diet. We hope that it will contribute to increased awareness about the disease and that the ME patients may be better understood by others.

We strongly desire that ME/CFS will be a covered disease under the Act on General Support for Persons with Disabilities. We will be steadfast in our efforts towards this goal until it is achieved.

List of the 71 Diet members who supported the petition (listed by party as of the date of petition submission):

On December 9, we met with two assistant section chiefs of the Ministry of Health, Labour and Welfare’s Intractable Diseases Division (the Specific Diseases Division was re-named effective October 1, 2015), where we submitted our most recent request letter to Minister Yasuhisa Shiozaki.

We reported on recent international ME/CFS developments, including on research papers from Stanford University and Columbia University, the U.S. National Institute of Health’s October 2015 announcements, and the effort by ME researchers and patients worldwide seeking to challenge the 2011 Lancet paper on the PACE trial. We informed the Ministry of the Association’s outreach efforts with The Japan Society of Neurology, such as our hosting of an ME information booth at the Society’s 2015 annual conference. In light of NIH’s announcement that ME research would now be led by the National Institute of Neurological Disorders and Stroke (NINDS), we requested the Ministry to also research ME/CFS as a neurological disease here in Japan.

On June 9th, JMEA delivered our petition for public assistance for ME patients with nearly 35,000 signatures to the 71 Diet members from both houses of the Japanese Diet who agreed to introduce the petition during this year’s extended Diet term. Deliberations on the petition are planned for end of the term. Some Diet members were in their offices when we arrived to deliver the signatures, and we were able to hand the petition to those members directly.

We gathered the signatures thanks to the combined efforts of many individuals since July 2014. The signatures were collected not only by ME patients and their families, but by many people who learned about ME for the first time and who wished to help bring about improvement in ME patients’ lives. We are deeply grateful to each individual who contributed to the petition.

The 2014 Ministry of Health ME/CFS patient survey exposed the serious situation of ME patients in Japan. Having come close last year with the petition being adopted by the House of Councillors’ in 2014, we will strength our efforts to realize the adoption of the petition by the House of Representatives in 2015. 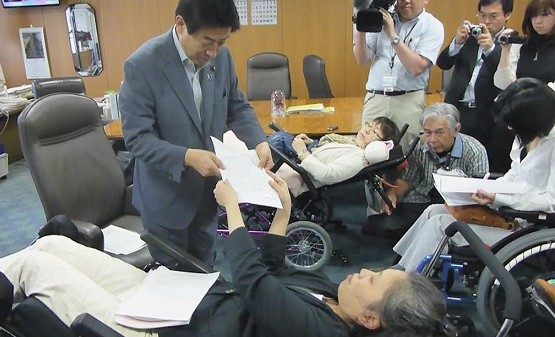 Japan ME Association achieved a direct meeting with Minister of Health, Labour and Welfare Yasuhisa Shiozaki at the Minister’s offices. 12 JMEA members including JMEA President Mieko Shinohara attended, together with the secretary to House of Representatives member Seiko Noda. Five officials from the Ministry’s Specific Diseases Control Division and Planning Division also attended.

We presented Minister Shiozaki with our most recent request letter. We expressed our appreciation for the Ministry’s allocation of funds in the 2014 budget for the ME/CFS patient survey. In light of that survey’s findings-which revealed that approximately 30% of patients are bedridden or nearly bedridden and that 65% patients are unable to work-we requested the Ministry’s support for the adoption our petition for public assistance of ME patients, which will be introduced before the Diet near the end of the 2015 term.

We also requested that research be funded on Waon therapy for ME/CFS. Severe ME patients who have benefited from the treatment informed the Minister that the availability of this treatment offer relief from symptoms to patients who currently have no effective medical treatment available to them.

Minister Shiozaki stated that research concerning the diagnostic criteria to be adopted in Japan is proceeding and that the work will be completed in a reliable manner. He explained that completing the diagnostic criteria was critical as a step towards the possible inclusion of ME/CFS among diseases covered by the Act on General Support for Persons with Disabilities.

The Minister stated that research on treatments must be preceded by considerations on whether treatment benefits can be scientifically proven. The Ministry must identify the most promising treatments, while keeping in mind that treatment in the earliest stages of the disease are likely to be more effective. He separately expressed his understanding of our desire for Ministry funding for research on Waon therapy.

Minister Shiozaki offered words of encouragement and shook hands with each of the ME patients and family members at the end of the meeting. Afterward, we held a press conference at the Ministry’s press club before reporters from various news agencies including NHK and Kyodo news. Coverage of the meeting aired on the evening’s 6pm Tokyo local news and 11:30pm “News Web” programs.

Japan ME Association and the St. Marianna University School of Medicine held a joint presentation and press conference on the results of the Ministry of Health, Labour and Welfare’s 2014 “Patient Survey Concerning Activities of Daily Living Difficulty Levels of Chronic Fatigue Syndrome Patients” at the House of Representatives Hall on April 22nd, 2015. Lead survey investigator Dr. Kazuo Yudo of St. Marianna University School of Medicine presented the survey results, with JMEA board member Dr. Isu Shin moderating the discussion.

So-called moderate ME patients comprised a further 35.1% of patients. These patients are mostly housebound, and are “able to conduct self-care but are unable to participate in regular social life or perform light labor,” or “are able to perform light labor on good days but require rest at home for more than 50% of the week.” Accordingly, the survey revealed for the first time in Japan that more than 65% of ME patients in Japan face a serious degree of impairment in conducting activities of daily living.

JMEA President Mieko Shinohara emphasized that the aspect of ME that patients cited as being the most difficult was physical suffering from disease symptoms. She appealed to the Diet members in attendance to adopt the Association’s petition in this year’s Diet session, following its adoption last year by the House of Councillors, but not by the House of Representatives.

Among the many notable comments raised in the ensuing discussion included: “There seem to be more patients who report not being able to work compared to other diseases,” “It is extremely difficult for patients to obtain Physical Disability Certificates,” “Any observations concerning the large number of young people and women among patients?” and “Does the uneven regional distribution of study patients reflect the lack of specialist physicians?” Questions from the media included: “How do the study results compare to studies from overseas?,” “Are there specific infections that trigger the disease?”

The survey team responded that the survey included patients who were unable to leave their homes for regular doctor visits; that there is no government or scientific organization in Japan that recognizes physicians as ME specialists; and that there is a need to re-examine the diagnostic criteria used in Japan.

More than 120 people attended the event, including 15 Diet members and 24 secretaries to Diet members across five parties. Officials from government agencies also attended, including from the Ministry of Health’s Specific Disease Control Division, the Department of Health and Welfare for Persons with Disabilities, and the Pension Bureau, as well as from the Ministry of Education’s Special Needs Education Division of the Elementary and Secondary Education Bureau. 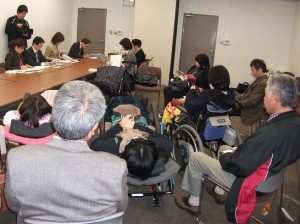 On December 9, 2014, we held talks with the new section chief and three other officials from the Social Welfare Bureaus Department of Health and Welfare for Persons with Disabilities Policy Planning Division. Eight JMEA patient, caregiver, and support members joined JMEA board members at the meeting.

We submitted our request letter to the Health Minister and provided the officials with ME resources such as our informational leaflets and DVDs. Since this was our first meeting with the new section chief, we briefed him about the severity and characteristics of ME. We explained that some patients pay JPY 25,000 out-of-pocket per month to rent electric wheelchairs due to the unavailability of any public disability assistance. Since many are unable to afford electric wheelchairs, they are unable to participate in activities like this meeting. We know of one patient who incurs over JPY 100,000 for private assistance due to her access to public welfare services.

ME/CFS is excluded from covered diseases under the Act on General Support for Persons with Disabilities, even though the expansion of covered diseases to 153 diseases was approved at the
58th meeting of the Social Security Council Disabled Persons Group. We sought and received confirmation that, in order for a disease to be included in the Act, it need not be designated as a rare or intractable disease, and that the actual need for welfare services and impairment level of patients’ activities of daily living will also be given consideration in future deliberations.

We discussed possible measures for patients whose symptoms continue to worsen as they wait for the new ME/CFS diagnostic criteria which include objective markers-a requirement for inclusion of a disease in the Act-to be established. The Ministry’s ME/CFS patient survey will come out in March 2015, bringing the plight of patients’ situations to light. We requested that the Department for Health and Welfare for Persons with Disabilities coordinate with the Health Services Bureau’s Specific Diseases Control Policy Planning Division to inform administrative agencies responsible for issuing disability certification about the serious nature of the disease.